The movies of John Carpenter are varied and many, he has highs with movies like the classic slasher movie Halloween and the horror remake The Thing, but has also directed some absolute stinkers of movies such as Ghosts of Mars.

What John Carpenter does like to do is have control, you will notice that in his best movies, he has a hand in Direction, Production, Writing and Composing, some of his movies he does all that and even throws himself in a scene!

This list of best John Carpenter movies are my favourites, they may not be his top with critics or in box office numbers, but to me, they for one reason or another are his best movies to date.

Slasher movies up till 1978 had a bad reputation, especially in the 1970s with a glut of exploitation movies that threw over the top gore and nudity at the viewer and very little else. The rise of political correctness also saw these movies lose moviegoers. There were some bright lights in the 70s, mainly The Texas Chainsaw Massacre and The Hills Have Eyes, but in October (when else?!) Carpenter released Halloween.

This was the first movie of his I ever saw, and probably one of the first horrors that really scared me. Michael Myers, with his inside-out mask, and his silent understated, relenting, menace really brings the horror with every scene he’s in. Jaime Lee Curtis plays her role perfectly, ending up as the heroine after a decade of the exploitation movies forcing sexually vulnerable girls to be chopped up, she turns the tables on the stalking Myers.

What impresses so much in this movie, is the simplistic, even minimalist direction from Carpenter. Simple camera angles, great foreground shots, Michael Myers shape in frames, even at the end, the breathing which is daunting, foreboding of the lurking evil that is Michael Myers. When you see the POV of Myers, you see something you hadn’t really seen before, what the killer sees. 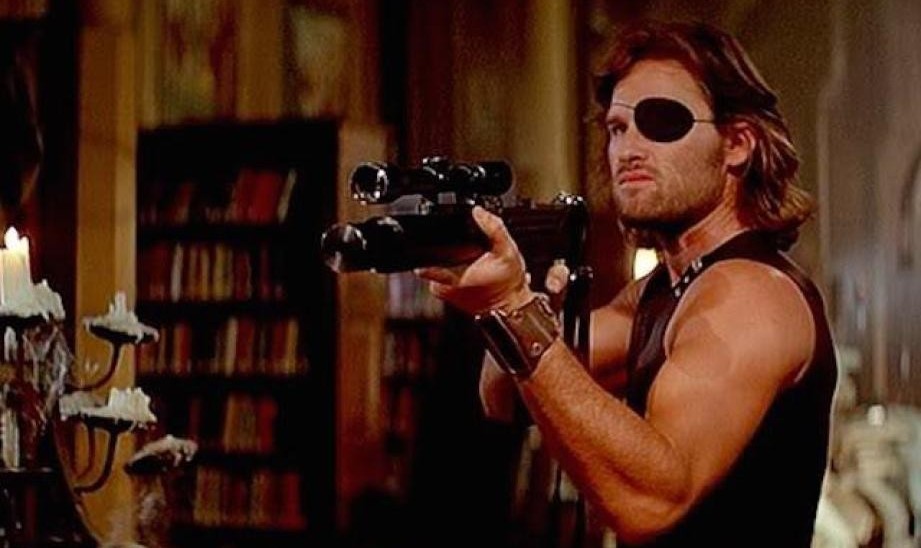 “Heard you were dead” is an ongoing joke that runs the course of the movie, Kurt Russells good guy image coming from his Disney movies (Dexter Riley roles in particular) was truly dead, here was a weary of the world, antagonistic, one-liner badass, so far removed from his previous characters, that you could say his previous roles were indeed dead.

In the early 80s John Carpenter introduced us to a closer to reality America than other dystopian movies like Blade Runner had done. What comes across is it’s dangerous, New York city, walled-off to keep prisoners and the unwanted away from everyone else is a cesspool of violence and gang warfare.

As the movie starts the first thing that hits you is the synth soundtrack, for me, it’s incredible and one of, if not Carpenter’s best audio work, although Assault on Precinct 13 really does stand tall as well.

For me, as a young teen seeing this film, Kurt Russell’s performance as Snake Plissken was the ultimate cool, he didn’t care, he shot people that deserved it, and in the end, had the last laugh.

Everything about this movie to me is perfect, Snake is the ultimate badass, New York is a pit of violence and depravity, the supporting characters add to the story and are not a distraction or unneeded addition, especially the cab driver played by Ernest Borgnine, who still rides around New York collecting fares, playing Swing Bandstand music and tells Snake to not travel to 42nd st at night while nonchalantly throwing a Molotov cocktail!

Escape from New York combined what I was looking for in movies, and I still yearn for movies like this nearly 40 years later. That exquisite mix of action, dark comedy and dystopian carnage. Perfect.

In 1982, there was one big Science Fiction movie, and it wasn’t The Thing, it was Steven Spielberg’s groundbreaking E.T. Unfortunately John Carpenter’s movie was released 2 weeks prior, and Carpenter suggests the timing of the release could have had a major impact on the popularity of his movie, everyone suddenly wanted happy, feel-good Alien movies, The Thing is none of these. The Thing is pure unadulterated horror, claustrophobic, unrelenting, visceral horror.

Kurt Russell again teams up with John Carpenter and the result is one of the most effective horror movies of all time. The claustrophobic environment of the Antarctica, Carpenter’s direction which leads to the viewer and the characters do not know who to trust, where the Thing is and what’s happening next. The special effects have to be mentioned, they are incredibly repulsive, and in fact, on release, the movie was criticized for this!! This should never be a criticism, horror should just be that, horrible, and the scenes like the defibrillator chest scene is an example of just how effective the effects are. 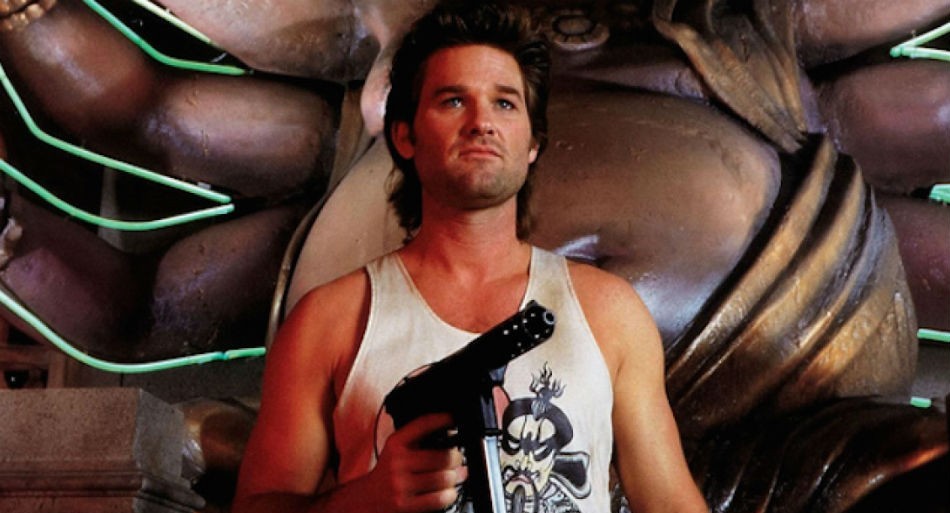 I guess what you could describe this as is a Kung Fu Fantasy Action Comedy Adventure, in fact much like the Eddie Murphy movie The Golden Child which came out the same year (Which unlike this was a commercial success).

The fourth movie which teams up John Carpenter with Kurt Russell as the front man (The first was actually the Elvis TV biopic) unleashes crazy ideas and a brilliant lead performance from Russell, again. Unlike The Thing, which pushed special effects this movie does suffer from quite poor effects, this is probably down to the fact that it was rushed and pushed out to compete with The Golden Child. But aside from some ropey effects, this has a great mix of campy martial arts action courtesy of the Three Storms and Lo Pan, played by the fantastic James Hong, a crazy story involving girls with green eyes and a Chinese Sorcerer called Egg (played by Victor Wong who also had a part in The Golden Child).

Kurt Russell plays a confident, straight-talking truck driver just wanting his owed money and not wanting to get involved in all the craziness that he, of course, gets pulled into, he plays well against Kim Cattrall as she plays the leading green-eyed lady trying to escape the clutches of Lo Pan.

No sign of Kurt Russell in this one, instead we have the wrestler “Rowdy” Roddy Piper who wanders around Los Angeles bumping into aliens. This is a sci-fi thriller which shows us the world through special glasses as an anti-consumer. When John Nada slips on the innocuous pair of sunglasses after getting mixed up with what looks like some conspiracy nuts, he (and us as a viewer seeing through his eyes) has his world turned upside down. He starts seeing people with messed up faces, billboards have their messages changed to what they actually mean, “CONSUME”, “OBEY” and on money “THIS IS YOUR GOD” and strangely the world is in stark black and white. It’s a moment of realization for Nada, the whole world around him is about control and subjection, and we as the viewer are along with this narrative as well. John Carpenter formed this criticism of the US, its Government and big corporation’s desire to keep its populace controlled and in order, and he takes us on the journey of discovery showing us forms of control and the people behind it (skull-faced aliens). During Nada’s forthcoming gun rampage, he utters the immortal line “I’m here to chew bubblegum and kick ass, and I’m all out of bubblegum”, he has an obligatory hands-on fight scene which lasts way too long but showcases Piper’s WWF skills. They live, is Carpenter’s call to the world to show the control that is being exerted over them, and that an everyday guy like John Nada can indeed fight back, watching this it really does hit home, and it’s probably not surprising that the movie bombed, people don’t really like being shown they are controlled, and when this movie failed at the box office it was the beginning of the end for the Director, his movies never gained box-office popularity again, and he retreated back to low budget movies. It’s a real shame that his confidence in the Hollywood way cut him off from the big budget movies that he could have released but he is involved as Producer, creative consultant and Composer in the upcoming new Halloween movie (2018), and wanted a more terrifying version than the previous sequels.

Big fan of John Carpenter. Seen all his movies. Really a legend. Reading your article brought back memories as some of these movies I haven’t seen for many many years. Good read.

Glad you liked the article, I’m always excited to hear he’s got a new movie coming out or is involved in a new project, as with the new Halloween movie.

Anyone spot WWF Wrestler Mr Piper? I saw that movie many years ago and actually never forgot its core message. That is what I loved about movies back when I was a kid, they were genuinely trying to tell you something. Now, though better in many ways, the core message is of little to no substance.

And Kurt Russel just caught up in the same character roles forever which gets boring after the 100th time!

Great movie recommendatoins here from John Carpenter Movies collections. John Carpenters books were even creepier than the movies as well.

Thanks Rod for this review and it was thoroughly enjoyed.

Thanks for the comment, I’ve loved John Carpenter movies for years as well, and his audio compositions, especially in Escape from New York are terrific. I never knew about his books, I’ll have to have a look.Thanks for letting me know!