You can see the Film4 line up here.

Coming up this week we have:

Only The Cat Returns and How’s Moving Castle are returning movies, so we have three new features for this week.

Isao Takahata’s second feature after his impressive start for Studio Ghibli is a stunning piece of filmmaking, based on the serialised manga of the same name by Hotaru Okamoto and Yuko Tone, as in the previous features from Takahata we have looked at this is a drama of subtilty and grace. In 2016 an English language dub was released to celebrate the 25th anniversary of its release with Daisy Ridley and Dev Patel voicing the main characters.
Like most of Isao Takahata’s movies, this type of drama is not something usually tackled by animation, but he shows us time and again that his touch is something that can tackle the nuances needed for this slight story. This is not about high drama or perilous confrontations, Taeko, the main character wants to take a break from the ‘salarywoman’ life she leads in Tokyo, she heads to Yamagata on a working holiday. Scenes move seamlessly between Taeko’s adulthood and her flashbacks to a 5th-grade schoolgirl life. It’s in these flashback sequences that Takahata’s style is really impressive, his use of negative, empty space and the slight fantasy elements really bringing a beautiful touch to the screen.

This movie is all about human nature, and the way it’s crafted, showing the young Taeko and her life as a school girl and the complexities in behaviour and contradictions as she tries to work out who she is, and her adult self, longing for something simpler and even more romantic, wanting change and needing to take time out to rediscover who she once was and who she wants to become. This movie is very much an adult movie, but not in the sense that it’s crass or containing themes not suitable for children, it’s just a movie about looking back on oneself and searching for what you really want. Taeko by the end of the movie is someone you really warm to, she’s very real and extremely relatable, and that’s the majesty of this anime. 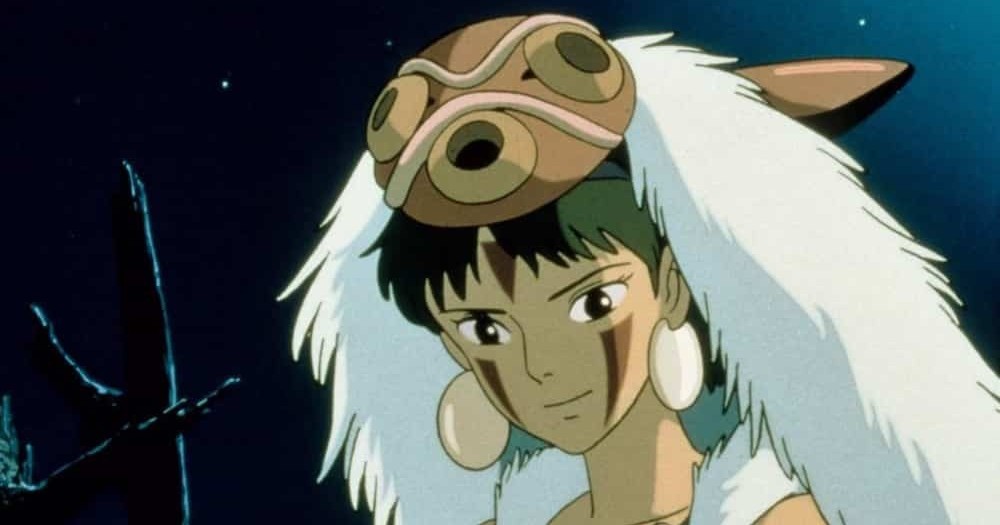 My favourite movies tend to be fantastical, something that you don’t see ordinarily, something out of the ordinary, this is one of the things I adore with Studio Ghibli and especially Hayao Miyazaki. The themes we see in other features are here again, and the main one being destruction and conflict between man and the environment. The story is loosely set in the Muromachi period but incorporates mainly fantasy elements, the movie starts with a young boy named Ashitaka, a Prince of the Emishi people who in the course of protecting his village from a rampaging beast, with snake-like tentacles and resembling a wild boar, has his arm infected by a demon curse (which was what had corrupted the wild boar) and he needs to journey to western lands to find out what evil is affecting nature and to see if his curse can be lifted.

Prince Ashitaka on his journey finds a monk who listens to his story and explains that the land is in decay. He tells the Prince about a place in the mountains that in it resides the Spirit of the Forest, but it’s certain death to venture there. We then see the two other protagonists of the story, Lady Eboshi and the eponymous Princess Mononoke. Lady Eboshi is the ruler of Irontown who is determined to develop weapons of war, gunpowder and advance her subjects through ironworking. Unfortunately, this brings her into conflict with the Wolf God and San, known as Princess Mononoke, Lady Eboshi having cut down much of the forest for her village and for raw material for her furnaces is on constant conflict with the protectors of the forest, San and Moro (The Wolf God) disrupting Lady Eboshi’s plans whenever they can (the original guerilla war?).
As is usual in Hayao Miyazaki features, there is never a real black and white story, none of the protagonists are truly evil, all having various facets to their characters and nuanced reasons for what they are doing, the balance of nature and environmental issues are eroded because of the efforts of technological advancement that the town engages in, but Lady Eboshi seeks the best for her people, looking after the woman and the lepers manufacturing her weapons. Ashitaka is constantly in conflict with his cursed arm and indeed his conscious, seeing the destruction of nature by Eboshi, but also listening to the lepers explaining how she saved them.

Ashitaka in a huge battle scene between San and Eboshi becomes a mediator, urging not to give in to hate, even when injured by the townspeople he has “eyes not clouded by hate” and strikes up a love with San, wanting the best for everyone, seeing what the hostility and hate between the two is doing to the land at the same time fighting the curse that is killing him.
This is not your pleasant family drama like Totoro, Kiki’s Delivery Service or Ponyo. This is in fact quite adult in its theme’s,  and the emotions can be quite strong, Ashitaka sacrificing himself in saving San in the fight is certainly moving. The animation is notably hand-drawn, luscious forests, detailed, lived in towns and wonderful detail in every scene. There was some use of CGI in this movie, but it’s only for certain effects, mainly the curse surrounding Ashitaka’s arm. The English dub was a translation and was written and adapted by Neil Gaiman, changing some of the references to make it more understandable to a Western Audience. Luckily for us, Studio Ghibli does not allow cuts in its movies any more, and the dubs are of great quality, leading to some great translations into English, like this gem.

The Art of Princess Mononoke

A strange movie even for Anime standards, 3 years after the incredible Only Yesterday, Isao Takahata released Pom Poko, a story about Japanese Racoon Dogs called Tanuki, who are threatened by developments encroaching into their home decide to fight back to reclaim everything that is theirs. The way they fight back includes their ability to shapeshift their form into any object or even human form if they so wish, they use this to trick and even murder a bunch of people.
There is certainly a lot of strange scenes in this movie, a lot can be put down to the cultural differences and how Japan views certain themes compared to the western world. And this may explain why it’s tough to get along with this movie, the Tanuki are very much a Japanese folklore creature, and in that are pretty alien to anyone else, but putting that aside, some of the things they do is immensely strange, especially one scene which involves the Tanuki attacking policemen with huge testicles, and yes this is something that is in the folktales of these creatures!
The broader themes are more understandable though, we have two warring factions of Tanuki that come together to fight a common foe, the usual Studio Ghibli commentary on the destruction of nature and fighting against human encroachment.
While a very strange film, the animation, and touches that Takahata brings to the tale are again, as always wonderful, the shapeshifting and detail of the creatures is especially fantastic.  The moral of the story is plain to anyone watching and this is not a happy ending and all live in co-existence, as a commentary on what is happening around the world it’s very truthful, but maybe the strangeness that you encounter could leave you questioning what you’ve just seen more than the worthy message it relays.

It’s the second week of the Film4 Studio Ghibli season. You can see the Film4 line up here. This week the line up is: Saturday 4th – 11am Arrietty; 12.55am Spirited Away Sunday 5th – Read more…