It’s the fourth week of the Film4 Studio Ghibli season.

You can see the full Film4 line up here. This week the line up is:

Monday 20th August – 11am Whisper of the Heart

Thursday 23rd August – 1.40am Whisper of the Heart

Porco Rosso and Castle in the Sky were reviewed last week, here. 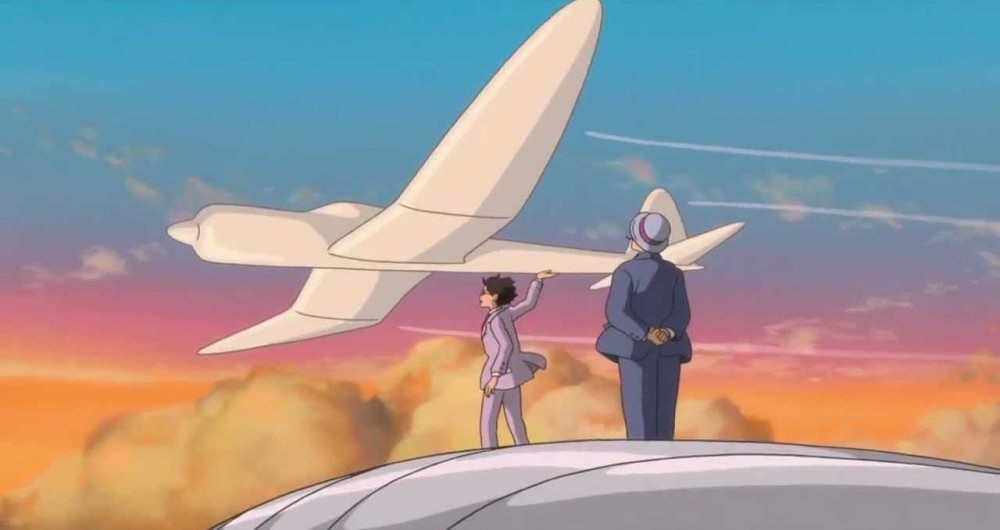 The movie mainly tells the story of Jiro after joining the Mitsubishi company designing fighters, unfortunately, the plans don’t go as he wants, and in fact turns into a disaster. With this, he has continuous dreams of the great Italian aircraft designer Giovanni Battista Caproni who encourages him to fulfil his love of designing beautiful aircraft. Sent to Germany to research and obtain a production license he returns to Japan to design new aircraft. The story from here follows Jiro as he meets a girl from his past, mirroring the story from the novel The Wind Has Risen. To say too much beyond here would ruin the romance of the story, and the triumphs and tragedy contained within it.

The animation as we see time and time again with Hayao Miyazaki is exemplary, he can concentrate on one of his loves, aircraft, although unlike many of his other movies he has specific aircraft, not the incredible crafts of previous works. His mixing of fact and fiction bring beautiful drama and life to Jiro, there is much sadness as well in the story and it does lend itself to a more mature crowd with its anti-war theme and Jiros ambivalence to what effect his inventions are having. The result is more a romantic view of the man whose aircraft caused much death and destruction, but you feel like Miyazaki is trying to show the art and passion behind the vehicles of war and placing it in an endearing love story.

Beautiful book on the Art of The Wind Rises 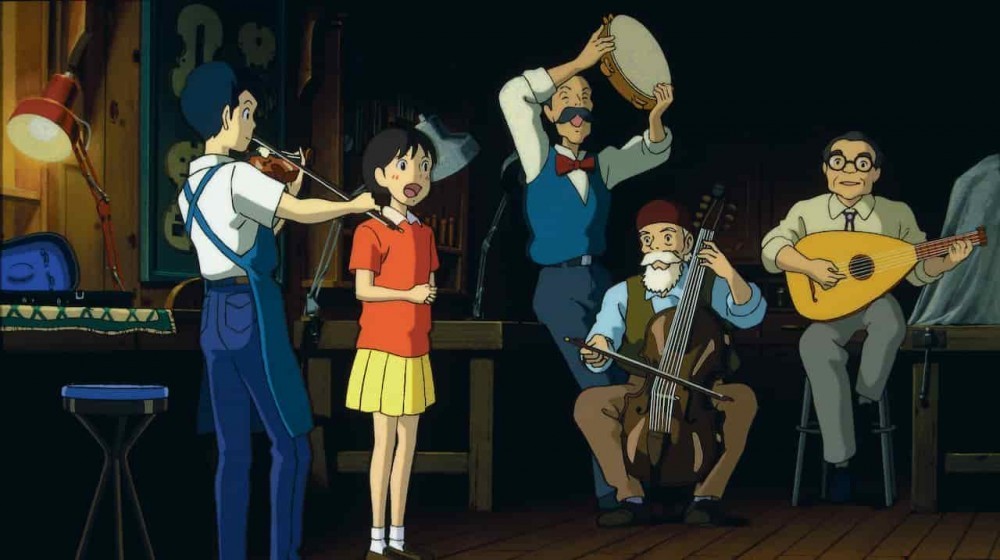 Yoshifumi Kondo, in his only directorial feature for Studio Ghibli, gave us Whisper of the Heart, a romantic, sweet movie which has the reoccurring themes of coming-of-age, strong female protagonists and an underlying positive message of life and love. It is, like many Ghibli movies a true slice of life story, eschewing the fantasy elements apart from the appearance of the incredible Baron Von Gikkigen.  As I said to open, this beautiful movie was his only directorial feature for Studio Ghibli, he was expected to become one of the Studio’s top directors but unfortunately in 1998 he died of an aneurysm, reportedly due to excess work and pressure, this has been mentioned as the reason that Miyazaki announced his first retirement and henceforth reduced his work output.
Coming back to the story at hand, the main focus is really the characters, how they interact with each other, and how close to life they really are, the genius is you sitting watching this movie and thinking how right they are. The main protagonist Shizuku is a middle schooler that spends her time dreaming about something exciting happening in her life, and then she happens upon a cat, an antiques shop and a young boy who want to make violins.
When the boy Seiji leaves to further his skills, Shizuku decides that her life is not going anywhere, she needs to do something positive and sets about writing a story. Unfortunately, she finds it harder than she expects,  having all the enthusiasm but none of the skills. One of the themes that Shizuku eventually displays is hard work, and it’s a strong focus through the film, showing that dedication and sacrifice can lead to bigger goals.
It’s a beautifully crafted feature, the animation having a crisp, clinical feel to them, but again with Ghibli the backgrounds being incredibly detailed. The fantasy sequence with the Baron being wonderfully realised and really giving life to a character that would soon become a leading cat. What we don’t see is the realisation of Shizuku and Seiji’s dreams, turning from apprentice to master, and this, unfortunately, mirrors the same for the director Yoshifumi Kondo, took too soon and without realising his full potential, hard work and self-sacrifice being his downfall, much as it’s Seiji and Shizuku’s aim.

In the first feature release not by Hayao Miyazaki or Isao Takahata from Studio Ghibli, the younger employees got to try their hand, written by Kaori Nakamura and directed by Tomomi Mochizuki, this is another slice of life type movie based on the 1993 novel by writer Saeko Himuro. The story follows a young man called Taku seeing a familiar face in a crowd and then in flashbacks a story of adolescent love and, quite surprising for Ghibli a love triangle emerges.  There is not much happening her, the three main characters holding together the quiet thin story quite well, it’s all about the little details in the story, how Rika and Taku interact with each other, it’s nevertheless very charming in its depiction of everyday life, and the teenage angst of love and growing up. At 72 mins, there isn’t much to get through, and the movie seems to tread fairly along, never really going anywhere, the animation, on the other hand, has a particularly life-like appearance, it’s the most astounding thing in this feature. The characters and the story may keep you watching for 72 minutes, but it’s not something that you’ll come back to, which is unusual with Ghibli. 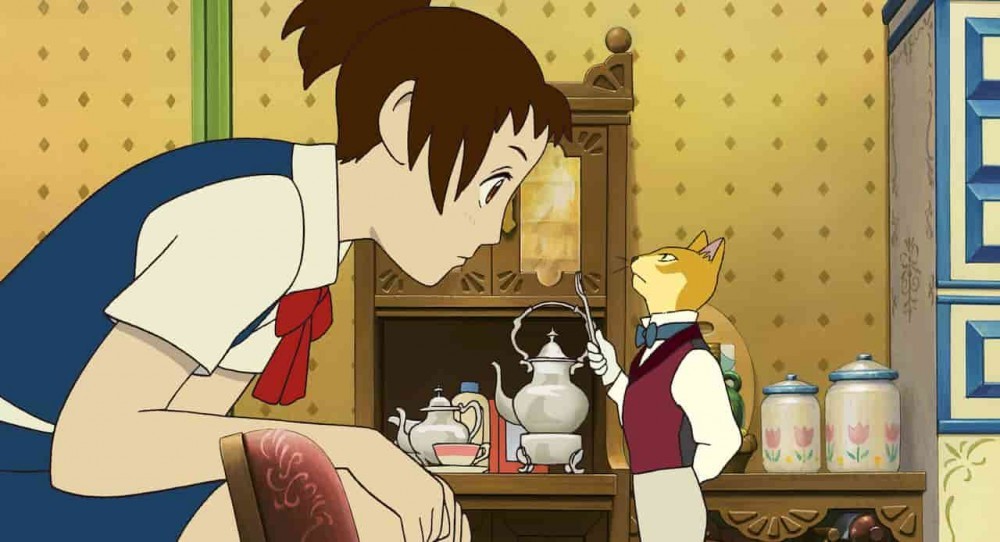 In only the Third feature not to be Directed by Hayao Miyazaki or Isao Takahata, The Cat Returns directed by Hiroyuki Morita and written by Reiko Yoshida is a spin-off of Whisper of the Heart, as we see the return of Baron Von Gikkingen.  But, unlike that movie, this concentrates on the Cat Kingdom with a young girl Haru who has the ability to speak to cats, when she saves the Prince of the Cat Kingdom, she sets things in motion, and through a misunderstanding agrees to marry the Prince.
What follows is Haru’s attempts to leave the Cat Kingdom while she is helped by the Baron, Yuki (a castle servent) and Muta, a grumpy hungry cat companion to the Baron. Very similar in approach to Spirited Away, but a lot cuter and cat-friendly, apart from the non-friendly cats.
This feature, although never reaching the heights of work by the more established directors of Studio Ghibli is a charming piece, shorter than usual at 75 minutes, although it was supposed to be even shorter at 20 minutes, the production overran in time, budget and length. What impresses is the main character, Haru, instead of the usual strong female, she’s a bit klutzy,  a bit of a slacker, waiting for everything to happen. But Haru is very endearing, as is most of the cast, the Baron being his gentlemanly self again and actually real this time, and Muta being sarcastic and grumpy, but never nastily. The animation is as lovely as ever, something that you can always rely on with Ghibli, even if the story is light and fluffy the collection of artists that the Studio employs are second to none.
If you enjoyed Whisper of the Heart, and want to see more of the Baron, this is a good feature, it’s not as thematic as that movie, but there is nothing really wrong with it, and at such a short running time you can’t really disapprove especially with the English Dub, which brings together the likes of Kristen Bell, Anne Hathaway, Cary Elwes and Tim Curry among others. At 75 mins, you can’t really go wrong. 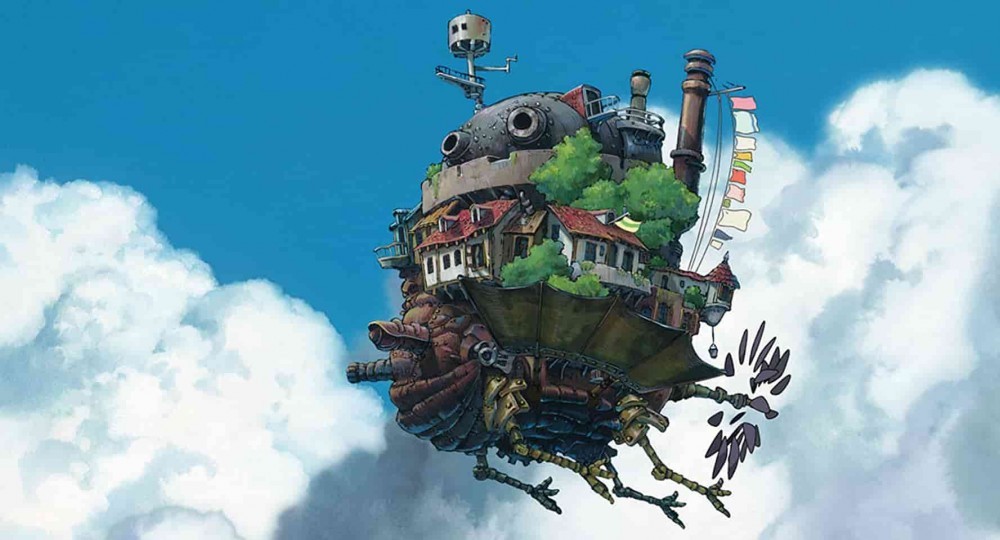 Opening to the most amazing walking castle, yes, walking, the story written and directed by Hayao Miyazaki himself and adapted from the novel of the same name by Diana Wynne Jones tells of a young hatmaker called Sophie that is saved from a confrontation with some soldiers by Howl a powerful Wizard, unfortunately Sophie has an encounter with the Witch of the Waste soon after turning her into a 90-year-old woman. Here starts Sophie’s adventures as she tries to break the curse of the Witch, meeting along the way a scarecrow called Turniphead and Calcifer a fire demon among others, and where does she end up? Howl’s Moving Castle of course, where else! The plot certainly is not as straightforward as some of Miyazaki’s other works, in fact, Wizards, Witches, Wars, moving castles and not always in a conventional sense, in however moving castles can be conventional make an appearance. Trying to do justice to the sprawling, many themed novel of the original may have looked like an impossible task but Miyazaki has crafted an incredible movie, which keeps the main themes and makes it extremely child-friendly, with the Disney dub, you have the likes of Christian Bale, Billy Crystal (stunning as the fire-demon), Jean Simmons/Emily Mortimer and Lauren Bacall voicing the characters to perfection.

Hayao Miyazaki really lets loose with his imagination on the design, both in the castle controlled by the fire demon to the flying airships, everything looking like it’s right from the steampunk book of design. The animation as usual with Miyazaki is wonderfully detailed, all the pistons and steam pipes on the castle and in particular the inside of Howl’s room, which at first viewing is a mind-numbing collection of oddities and trinkets, way too many to take in without greater inspection. The castle really does take centre stage, as it is the hub of the comings and goings, it’s ability to change location and morph into something completely different is really wonderous.
The movie is very much anti-war, with Howl interfering in the war and remarking how stupid it all is people fighting each other, but the focus is on the flaws the two main protagonists have, Sophie’s belief she isn’t worth anything and Ugly, and Howl with the ability to protect the ones he loves but each use of magic he leaves more of his human side behind turning to a giant ugly black crow. The movie is very much about growing up, learning to live with your flaws and it’s more than the two protagonists that learn this along the journey.

It’s the second week of the Film4 Studio Ghibli season. You can see the Film4 line up here. This week the line up is: Saturday 4th – 11am Arrietty; 12.55am Spirited Away Sunday 5th – Read more…